I’m not much of a girly girl. Most days, I’m sporting jeans, a t-shirt of some description and a flyaway ponytail, if I can get away with it. But when I stumbled upon this awesome pink ombré cake video tutorial, I couldn’t help myself – I squealed and jumped around in the girliest of girly girl ways for a good minute or two. Partly because I’ve been itching to try an ombré recipe for a while now, but also because Ann from How To Cook That makes it look like an absolute cakewalk – pun very much intended. 😉

Not that I nailed it – as you can see, I totally botched some of the icing, whoops! – but overall, I’m pretty chuffed with how it turned out first time around. Besides, practise makes perfect, right? I’ve seen some crazy beautiful ombré cakes with impeccable rose petal icing and am already toying with the idea of attempting one myself.

Anyway, onto the cake! I opted for a sponge, but you can use any cake that tickles your fancy. This was my first time ever making a sponge, so not even knowing where to start, I took to good old reliable Google and stumbled upon Donna Hay’s basic sponge cake recipe. I was a little puzzled at first, since there didn’t appear to be any sort of rising agent in the recipe aside from the eggs, but it didn’t seem to be a problem when I popped four beautiful golden babies out of the oven – not a euphemism, in case you were wondering. 😉

Ann advises you have three cake layers for optimum ombré results, so you’ll have to increase the quantity of each of the following ingredients by adding half of their original quantities. I wasn’t sure how they were going to turn out, so I doubled the recipe, which left me with one cake to spare in case something went wrong – better safe than sorry!

Grease the sides of two 20cm round cake tins and line the base of each with baking paper.

Sift the flour three times and set aside.

Beat eggs and sugar with an electric mixer on medium-high speed for 8-10 minutes, or until thick and pale in colour, and tripled in volume.

Divide cake batter evenly between both tins and bake for approximately 25 minutes or until cakes are golden brown and spring back when pressed lightly.

Looking forward, I’d probably experiment with another sponge recipe. These turned out relatively well considering they were a first attempt, but they were slightly eggy and not as light and airy on the inside as I would have liked.

I used the buttercream icing recipe on the How To Cook That website, and doubled the ingredients thinking that would be enough, but silly me, I missed the note that said I needed to triple them to completely cover the three cake layers!  In any case, I’d probably recommend you make three separate portions of icing or else you’ll end up with a face full of icing sugar! I just got by with a double dose of each ingredient, but I was scraping the bottom of the bowl trying to cover the top layer in the end.

Your choice of liquid food colouring

Loosely combine butter and icing sugar in a large bowl.

Beat with an electric mixer on medium speed until well combined.

Add one tablespoon of cream or milk at a time until you have reached your desired consistency.

Once you’ve churned out enough buttercream, place about a third into another bowl and set aside.

Then, starting with a few drops of your food colouring, incorporate into the rest of the buttercream and beat until you have a pale shade of your chosen colour. Take a fifth of the buttercream out and place into a zip-lock/icing bag.

Repeat the process, gradually adding a few more drops of food colouring to the buttercream at a time, until you have five different shades.

To assemble, take one of your sponge cakes and evenly spread a generous amount of the uncoloured buttercream over the top. Place the next cake on top and repeat the process twice more. Make sure to spread a thin layer on the outsides of each layer as well – this will help with the ombré icing later on.

Now for the fun part! Once your three-layered cake is covered in white buttercream, take the lightest shade of coloured buttercream and pipe blobs the whole way around the top of the cake. Then take a teaspoon or a small palette knife and squash the bottom half of each blob, dragging it downwards.

Sidebar: it really helps to occasionally dip your teaspoon or knife into some hot water; this way, you get a nice, smooth finish. Which I definitely will keep in mind for next time! By the time I got to the third row of buttercream, my water was lukewarm at best and the smearing got messy to say the least!

Continue doing this until you’ve made it the whole way around the cake. Then take the next shade and pipe your next set of blobs so that they cover the bottom half of the smears from the top row. Repeat the process with the remaining buttercream. With the darkest shade, simply pipe blobs along the bottom of the cake and voilà! You have an ombré cake!

Check out the full video tutorial on How To Cook That here. Definitely worth having a visual aid handy if you get stuck! I had so much fun making this, and anybody thinking of making one should go for it. Life truly is better in colour! 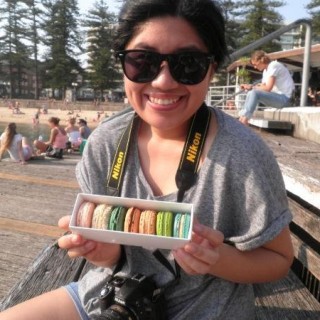 I'm Erika, a budding food and lifestyle writer from Melbourne. Follow me as I eat my way through this wonderful city. Thanks for dropping by! x

That feeling when your stomach drops... 😯🤭 @ajhackettbungynz
Congrats to these two lovebirds on FINALLY tying the knot! 💕 #weddinggoals #yarravalley #putaringonit
Would be Rudolph me not to bring a little something along to the festivities! Merry Christmas, everyone!🎄🦌☺️
Another amazing experience checked off the travel bucket list! ⛩️ #fushimiinari #torii #kyoto #explorejpn